Akkermansia muciniphila: the making of

The gut microbiota has become a new player in the onset and development of metabolic syndrome and its associated pathologies. One gut bacterium that has been positively associated with leanness in mice and humans is Akkermansia muciniphila, which is naturally present in the gut microbiota of healthy people. I have a very special story to tell you about this unique bacteria…

Once Upon a Time in Gut Microbiota

The history of Akkermansia takes us back to 12 years ago! In 2007, our lab discovered that mice fed with a diet enriched in saturated fatty acids were characterized by a profound modification of the gut microbiota (Cani et al Diabetes 2007). This seminal study was the first showing an impact of diet-induced obesity on the composition of the gut microbiota.

Strikingly, by using high throughput sequencing methods we serendipitously found that prebiotic feeding was induced a profound change of the microbiota composition, with several dozen of microbes affected, and among them Akkermansia muciniphila was increased by about 100-fold. In the same series of experiments, we found that Akkermansia muciniphila was dramatically decreased in the gut of diet-induced obese and type 2 diabetic mice as well as in genetic obese mice (ob/ob).

In a paper published in 2013 in the Proceedings of the National Academy of Sciences of the USA (Everard et al PNAS 2013) we discovered that the administration of Akkermansia muciniphila was able to moderate the development of obesity, fat mass and type 2 diabetes, and to lower inflammation. Interestingly, these effects were not due to specific changes in food intake. However, it was demonstrated that the bacterium reinforced the gut barrier function, leading to the blockage of gut permeability and therefore blocking the leakage of bacterial endotoxins into the blood. Different molecular mechanisms have been identified, and among them the capacity of Akkermansia muciniphila to increase the production of mucus, thereby increasing the mucus layer thickness (i.e. a physical barrier), but also to restore the production of antimicrobial peptides, as well as the production of different anti-inflammatory molecules: endocannabinoids.

We also found a strong link with the regulation of the immune system, therefore, we may not exclude that this bacteria is clearly, thanks to its location close the intestinal cells and the immune cells also by the same occasion, can easily dialogue with the host and finely regulate the immunity. (Plovier et al Nature Medicine 2017, Hanninen et al GUT 2018 and Depommier et al Nature Medicine 2019 in humans).

Understanding Akkermansia muciniphila and its benefits

There are probably several mechanisms explaining how Akkermansia muciniphila dialogue with our human cells. It is, for example, demonstrated that Akkermansia muciniphila produces specific byproducts such as short chain fatty acids (SCFAs) (acetate and propionate) as a result of mucus degradation. These SCFAs are in fact produced within the mucus layer which means very nearby to the epithelial cells. This strategic location in the lower part of the gut will confer to Akkermansia another advantage: this is exactly where you can find the highest abundance of a specific type of cell (i.e. enteroendcrine L-cells). These cells are producing key messengers regulating the gut barrier but also the energy and glucose metabolism.

Legend: Microbiota-derived SCFAs influence host endocrine functions. Dietary fibers are substrates of the microbial enzymatic machinery; they are fermented in SCFAs (namely acetate, butyrate, and propionate). SCFAs influence host metabolism by acting locally on receptors expressed by the intestinal enteroendocrine L-type cells (i.e., GPR-41, GPR-43) or distally, after entering the circulation and being transported to other organs (liver, adipose tissue, brain, and muscle). Importantly, SCFAs can also be sensed by the gut bacteria themselves and regulate pathogenic colonization, depending on their concentration. This type of cell-to-cell interaction is known as quorum sensing

Akkermansia muciniphila also express numerous proteins on its outer membrane. In fact, when we look at the microscopical level, Akkermansia muciniphila is harbouring long pili (i.e., a sort of hair) on which different proteins are “travelling” at distance for the core part of the bacteria. In 2017, we discovered that one of these proteins, the protein called Amuc_1100, was skilled to regulate the immune system by binding onto immune receptors. We demonstrated that Amuc_1100 isolated from the outer membrane of A. muciniphila improves the gut barrier and partly recapitulates the beneficial effects of the bacterium. (Plovier et al Nature Medicine 2017).

The medical jump from mice to humans just got easier

Translating the results obtained in rodents in humans remains a key step. However, when we discover the impact of a “novel” commensal bacteria such as Akkermansia muciniphila this can become a very long journey.

Akkermansia muciniphila requires specific conditions to be able to grow, and the culture medium initially used to growth Akkermansia was a complex mixture containing animal-based medium. In order to solve this drawback, Prof. de Vos and his team designed a synthetic medium compatible with administration in humans (Plovier et al Nature Medicine 2017). Last but not least, when cultured on this synthetic medium, Akkermansia muciniphila retains its efficacy in mice for treating diet-induced weight and fat mass gain, and also improved glucose metabolism and gut barrier (Plovier et al Nature Medicine 2017).

In 2013, we discovered that the effects of Akkermansia muciniphila were completely abolished when the bacterium was destroyed by using high temperature such as autoclaving. This procedure is a marked heating treatment that destroys all the components of bacteria and spores. But we were interested to test whether a mild heating procedure such as a pasteurisation (30 min at 70° C) would impact the efficacy of the bacterium. Surprisingly, this method of did not stop the effect of Akkermansia muciniphila but even exacerbated its beneficial impact leading to an even greater protection than the living bacterium regarding various cardiovascular disease risk factors such as insulin resistance, hypercholesterolaemia, or the storage of fat in adipose tissue (Plovier et al Nature Medicine 2017).

How does pasteurisation increase efficacy of the bacteria?
Well, so fat the answer in not very clear, as Akkermansia muciniphila is expressing on its outer membrane different proteins (resistant to the pasteurisation) whether the pasteurisation is facilitating the accessibility to active molecules remain possible.

In this double-blind, randomised, placebo-controlled pilot study, we recruited overweight or obese volunteers, all displaying insulin resistance (pre-diabetes type 2) and metabolic syndrome. The volunteers were randomly divided into 3 groups (placebo, 10 billion live bacteria or 10 billion of pasteurised Akkermansia muciniphila) and were asked not to change their dietary habits or their physical activity. Akkermansia was provided as a nutritional supplement.

We observed an excellent compliance and tolerance (there were no side effects) in the groups taking either live or pasteurised bacteria.

Although the study was a pilot study, we also measured different metabolic parameters. We found that the supplementation with the pasteurised form of Akkermansia muciniphila prevented the deterioration of the health status of the subjects by targeting several cardiovascular risk factors (reduced insulinemia, improved insulin sensitivity as well as lowering cholesterol).

We also observed a decrease of several markers of liver and blood inflammation and this despite a very slight decrease (no statistically significant) in the body weight and hip or waist of the subjects (2.3 kg on average, -2.6 cm hip, 1.5 cm waist). These effects strongly suggest that metabolic effects may also occur before any large body weight loss. Whereas, different metabolic parameters such as insulinemia and insulin resistance or hypercholesterolaemia continued to deteriorate over time in the placebo subjects. (Depommier et al Nature Medicine 2019).

Conclusions are clear: this first pilot study conducted in humans confirm the previous data observed in mice. Indeed, the pasteurised form was more efficient than the live bacteria on several parameters. This also means that although the bacteria were dead and therefore absolutely not “digesting” mucus, the activity on the gut barrier remained very strong.

Advantages and limitation of the study

Although the Microbes4U study is limited in terms of subjects enrolled, and the power of the study not designed for all the endpoints studied, we have observed several interesting results. One of the most interesting is the fact that the markers of inflammation such as the blood endotoxins levels were decreased suggesting a reinforcement of the gut barrier. In fact, we were not really expecting effects on the body weight and waist/hip but still we observed interesting trends. We were also positively surprised to see that as observed in mice, the pasteurised bacteria was more efficient than the live bacteria. Finally, we may not exclude that the bacteria can also be likely useful for gut disorders.

The most important point is to confirm the results of this small pilot study in a larger cohort. We also have to note that in the present Microbes4U© study, the subjects were keeping their normal diet.

In any case although very encouraging, the use of Akkermansia muciniphila as a nutritional supplement will NEVER replace appropriate dietary habits and physical activity.

I really believe this as a complementary approach as an adjuvant to boost the metabolism and help to improve metabolic factors.

Enjoy here a video from UCLouvain that summarizes main findings from our study. 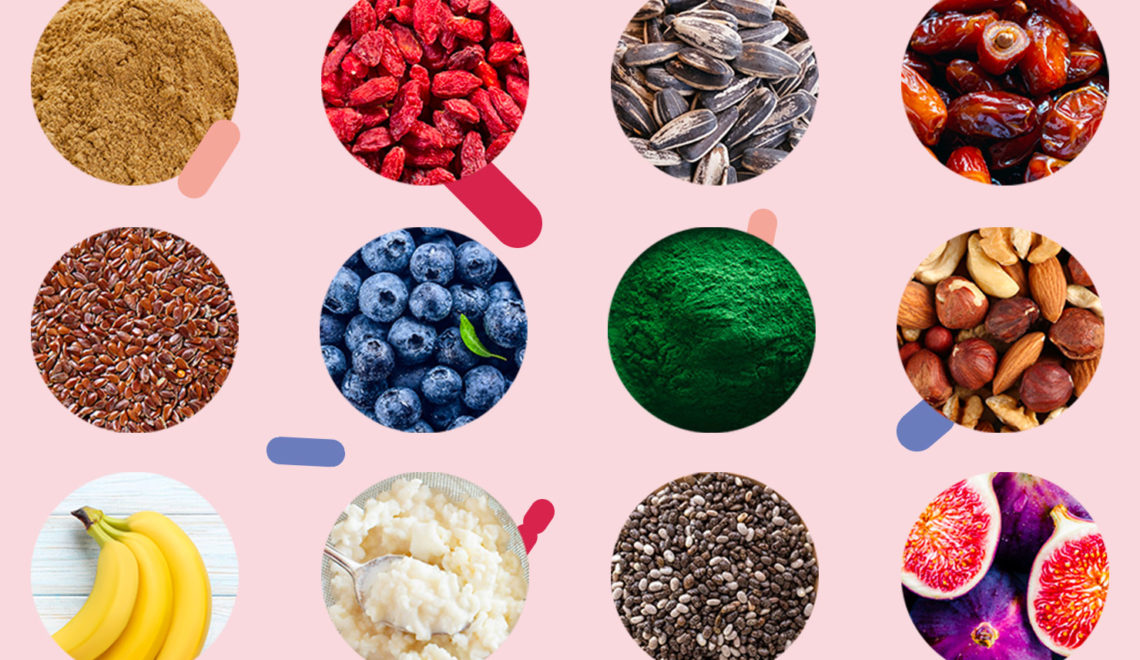 Metabolic diseases, Obesity
The Secret Ingredients for the healthy-gut smoothie